The first time I poked an asshole, I was 17 years old. No, by asshole I don’t mean Ibrahim Ali (of malay supremacist organization PERKOSA) nor do I mean our asshole of a gahmen. I wouldn’t poke a single finger on that racist, hatred-stirring Shitbrahim although I wish Anwar will do him a favor and just ram his butthole. Our gahmen instead have their dicks too deep into all our assholes that it’s quite impossible for us to reach around to poke them back. Unless you’re flexible like this: 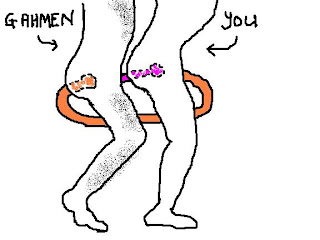 as u can see from diagram... gahmen people are very hairy. Because they're very lazy. Yes, hairy = lazy.

But nabeh you Asians where got so tua ki? That’s why I’m proud of my Godzilla. But my Godzilla also cannot go so long like that. So Malaysians all have very loose assholes and no problem with constipation since we get fucked by gahmen so often. But they’re smart enough to ban sodomy. So basically they can fuck our asshole but we cannot fuck theirs.

Then should they come out with a list with what can be inserted into your backside/vagina? Waraaoeh, Approved Vaginal/Anal Insertion Object List: 1) Tampon 2) Diaper Plug 3) Contraceptive IUD 4) Cucumber ,etc… puah bai!! Gahmen really khamlan wan.

Then it was the most kaulat feeling. I feel as though my finger is stuck in the vacuum cleaner pipe liddat… siiibeehhh suction kaukau and then somemore got pulsating feeling. That time I know, beh hoh seh liao lah…. If I put Godzilla inside I will be in heaven. Of course that time I try not to think of the leftover chocolate cake stuck inside. Or the possibility of Godzilla kena fart. If not Godzilla will run and hide under turtleneck liao.

But that time she beh song d, complained very pain. Kanineh index finger only so small she already say pain, if I let Godzilla go in play then she mah lausai for one year? So I just I just insert abit and finger halfway while we fuck lor. I thought let her learn to enjoy abit abit first. Next time only go all the way. Its like driving liddat mah, must first gear second gear then later on only can go last gear. If not engine straight away die. But that was my first time fascination with fuck backside. Although not yet get to fuck backside. But I will update again next time what happened after that. Last time 17 years old abit paiseh to buy lubricant in 7-11 mah… you know lah usually the Minah Tudung will look at you one kind. Later they bisik bisik pointing pointing in the shop…. I very paiseh leh 17 years old only leh. So without KY Jelly and needing extra extra lubricant, what did you think I used?

Correct guess I will send you a packet of KY Jelly.

p/s: will i get thrown in jail by the gahmen from writing this?
Thankyoucumagain written by Goldfish Uncle at 4:06 PM