Limpek was in the Standard Chartered KL Marathon last week. Between training for that and betting and watching the World Cup 16s to final eights, there hardly had been any time to write at all. Plus limpek is still in a limbo over the decision on whether to leave this company or not. Once again, life is full of fhan nao. My apologies for the slow update. However much limpek wish to have all the time in the world to write, sometimes life just doesnt work out the way you want it to.

The Stanchart Marathon was a blast. Limpek really had lots of fun despite the disappointing outcome. With 17500 runners, it was expected to be a success. Limpek only ran in the 10km race although abit beh song cause alot of auntie-uncles, kids and teens also can run the 42km or 21km race. Heck, if tuapui Kenny Sia can run 42km, limpek dont see why limpek's sexy fit and steady body cannot do the same distance in half his time. Thanks to all the cibai ciggarettes and beer, make limpek slowly become fat pua pi kia.

Limpek only managed to log 52 minutes. Ranking also cannot get into top 50. Puahbai. Way off the target of 45 minutes. The 1st place runner only 30+ minutes. Kaninah during the last 3/4 of the race, limpek already saw them running towards the finish line. See liao also beh kam muan.

Worst of all, limpek lost to a good friend from . We call him G.I Joe. Although G.I Joe was once involved in the elite military force oversea, these few years he had been pretty much drinking his liver away. The last time limpek go club with him, he alone can finish 2 bottles of whiskey. Kaninah... sibeh sampat this kind of guy. 2 litres of whiskey still can stand oon-oon. Limpek 1 bottle also can feel the gugujiao shrink into caterpillar size already. Own mother also probably cannot recognize.

G.I Joe clocked in 50 minutes. Season runners will know that 2 minutes difference is like heaven and earth. Heck, in that 2 minutes, G.I Joe can finish cooking ramen while waiting for limpek to arrive.

First km usually very hard to run properly because all the auntie uncles will be blocking your way. Thousands of them, so you have to run zig-zag like playing So at the first km, limpek try to sneak past them unnoticed from the far side, so they wont even know limpek long gone already. It worked with most of them, Cliffard, Tobby, Tiong Beng, Weeman and neighbor Sean all didnt see. But this blardy G.I Joe saw me and quickly chase. First km he past by limpek, and the very next time limpek saw him was at finish line already. Kanineh. Puahbai!

But at least still beat the rest of the chikopeks. Most of them run like old aunties with menopause, might as well just walk. Sibeh lau kui... hahaha! But okaylah, out of thousands of runners, at least they still maintain under top 100.

The track was around KL, with pretty good scenery. There was a lot of chio gers also! Limpek thought marathon all will be aunties like Chew Mei Fun type, only know how to walk and pok-pek-pok-pek, but turns out alot of fit fit young gers. Seeing them in their tight tops and sports bra, and their butts keat-keat carved out by the spandex, Limpek was very scared Gojira will suddenly wake up. Kanineh, can you imagine, run halfway Gojira stretch out far far, wahpiang, it will be like running and swinging a golf stick at the same time.


So limpek tried to focus instead on one very keat old uncle infront of limpek. The old keat uncle also got very kaulat butt actually. But Gojira doesnt get amused with uncles.

Limpek run until song-song already around 6km suddenly see got high-school cheerleaders at the roadside giving motivation. They jump-jump like sibeh happy, the nehneh also bounce-bounce like sibeh steady. Its like swinging tao-foo in thin plastic bags. Kaninaaa... limpek have to quickly pry my eyes off. If not limpek will automatically run towards them instead. Straightaway limpek have to parking Gojira again just in case he ki-hiao and decide to stretch. Limpek re-parking to 12 o'clock, so even if he stretch out to guailan, its still hidden under shirt. Blardy cheerleaders... sabo limpek. 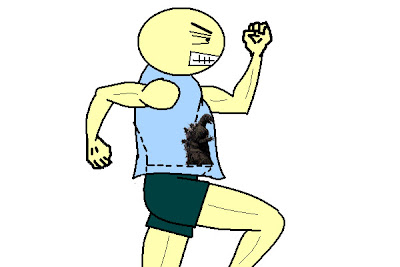 Kilometer 7, wah cibai go up hill all the way. Limpek also didnt expect got steep hill wan. At halfway limpek really boh-ki already, wanted to take out ciggarette and sit by the roadside. Then can smoke there and look at the nice view of KL from hilltop. Wahaha sibeh enjoy sia... 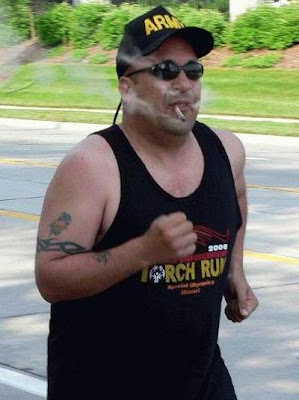 Then limpek remember didnt bring ciggarette... exactly because to avoid moments like this! Kanineh boh huat, go back to running lor. 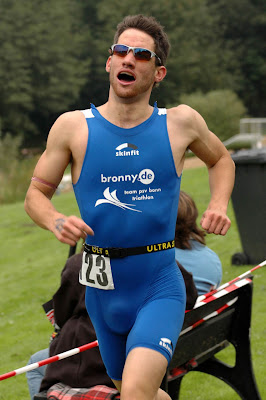 I know you are staring at the wrong places...

then who would've thought... 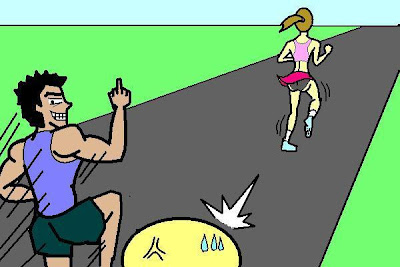 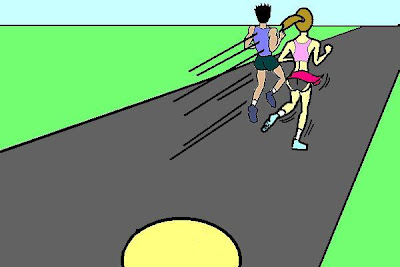 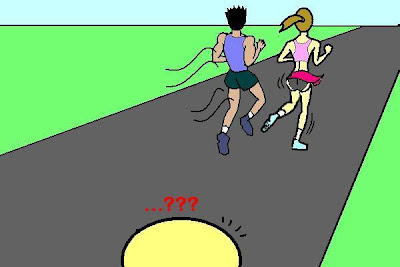 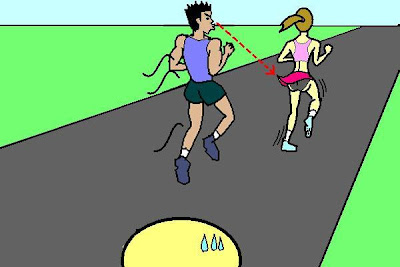 Turns out his last burst of nitrous actually empty tank already wan (apart from him being distracted by some flashing sports panties). By 9km limpek was already right behind his ass. He noticed limpek close up already, tried to fire up a few more times with big steps. Wahaha but limpek see no difference also... he become like those modified Kancil with exhaust pipe as big as your leg - sibeh fucking loud but the car cannot move.

So limpek follow his slow pace to save up energy. Then by 9.5km, limpek's turn to tekan nitrous. Limpek zoom passed him and gave him back the Cha-Cha shoulders. HAHAHA. He probably end up frustrated at the back, running with tears streaming down like the Japanese football team. Thanks to hot pink skirt runner! 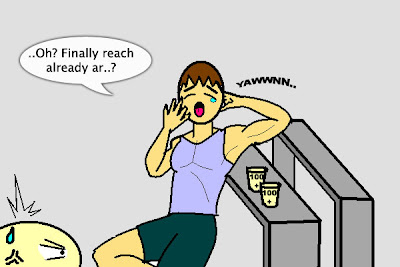 so limpek quickly go get an extra cup of 100plus, stand there pretend to look bored and wait for Cliffard. 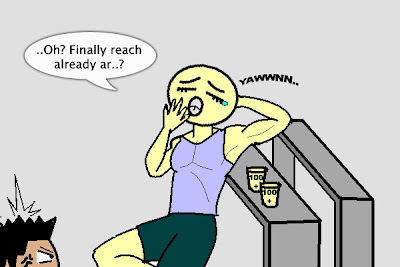 The beh song look on his face at that exact moment is worth the whole 10km torture. Then Cliffard also boh kam muan go and get extra cup of 100plus and wait for the next chikopek to arrive.

Then suddenly heard a familiar voice behind us... 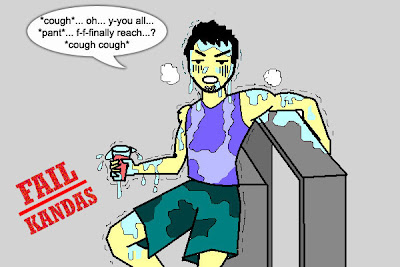 PUAHBAI!! Hahaha! He really think we all blurfuck like sotong. He purposely go one big round around us to the water stands and then come up behind us. Then pretend to have been there for a long time waiting for us already.

But nabeh we see him still panting like just kena chased by dog, and the shirt was completely drenched with sweat. Straightaway know he just arrived. Sean, got timer wan la, you gong cipet!


p/s: End of this month, limpek will be running for the BHP Orange Run around Damansara Curve 11km. Besides that, limpek will be joining the next Standard Chartered Marathon in Singapore! Sounds like alot of fun.


My condolences to friends and families of the runner who passed away from the KL marathon, may he rest in peace.

Also, here's a bet limpek cant make up my mind. Many guys think Holland hasnt rise up to their full potential and if they do tonight, Brazil will be in trouble (especially if Brazil give ball somemore). But from the matches limpek watched so far, Holland play so-so only compare to Brazil sibeh power kaulat. But Brazil will be without Ramires & Elano which is a big deal. All limpek's chikopek friends will be betting on Holland eat ball, but limpek really cant make up my mind. Also, limpek just want to put poll again. So, limpek will bet depending on the poll la okay, thanks


Thankyoucumagain written by Goldfish Uncle at 8:42 AM