Last week's news in Malaysia has been full of flavor. The reporters must be damn syok with all the news to report. Yet, did you see what was on the front page of The Star on thursday? Early early first thing in the morning, this is what they slap on your face in HUUUGGGEEE size main page. 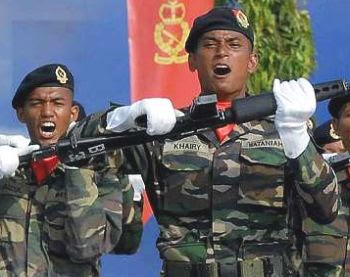 What the flying fuck.

Fucking Khairy Jamaluddin looking like someone was sticking it in his asshole.

Well if it was going to be anyone, based on the greatest hate-khairy factor, it'll most likely be him. 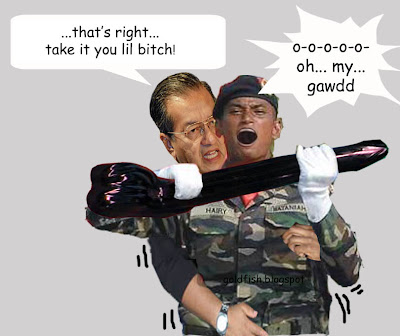 Nothing to kill limpek's mood more than cocK-hairy's tard face splattered on the front page first thing in the morning. Somemore in regards to donno what redundant bullshit story of cocKhairy toughening it out in military training for 1 month (oh, wow, how impressive... he's Navy Seal material now). Somemore what codename Terrier training. Kahnin, what's a lazy silver-spoon-overfed neutered english bulldog like him doing in a 'Terrier' training? Here's the article. Good job gahmen, for insulting the uniforms and military of Malaysia by putting it on this porkchop. Now we can really take the military seriously. 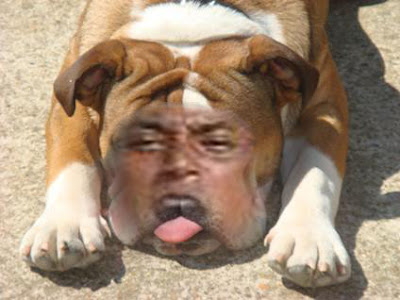 Nabeh, who the fuck cares about Khairy!? This insignificant cock-pus does NOTHING for humankind let alone Malaysians, not forgetting the supposed champion of Malay rights couldnt even speak Bahasa Malaysia when he first return. Malaysian? Even the pirate dvd ahbeng does more for the society and speak better Malay than him.

Also son-in-law of the worst performing sleepy prime minister of Malaysia and corrupted to the very bones. Eat slipper rice to the very max worming his way into power by laying the ex-PM's daughter, and then robbing the malaysians big time. Heck, people hated him enough to publish an entire book just to announce how much he is hated. Way to go cocK-hairy, you sure booked yourself an express no-connection ticket straight to hell.

Yet, The Star finds no problem in farting out this article.

Well you cant really blame those puahbais. The Star is a piece of shit government-run newspaper full of selective reporting and propaganda messages. The Star is pwned by MCA. MCA is pwned by UMNO. And UMNO is pwned by corrupt elitist of Malaysia. So what kind of decent journalism do you expect from the Star? 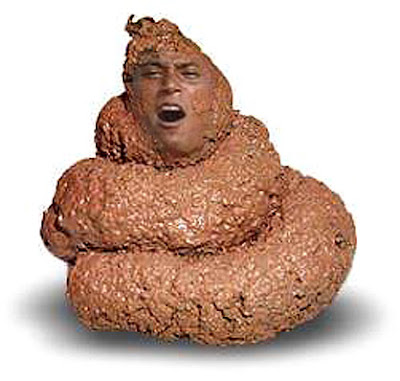 ohhh so steamy and nais....

Ok forget cocK-hairy Jamaluddin, lets not ruin our appetite. Did anyone see the report on this? 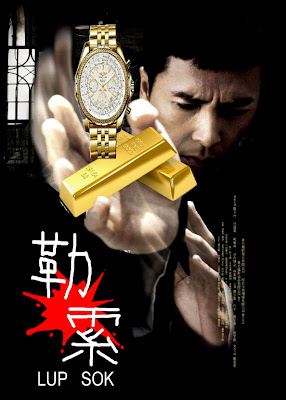 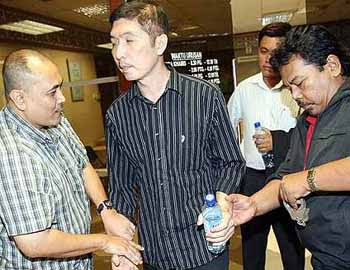 Kanineh! Really so zhit tor meh?! Sifu have to go lou lup some ahbeng gold-trader and make him give RM100k? Is sifu working part time ahlong collector? Limpek somemore remember Grand Sifu Ip Man say in the movie "Chinese Kungfu is not about the physical prowess! Its about the discipline and chinese spirit of chivalry!"

Okay that was interesting and whatnot. But limpek realize though, in the whole article why is there minimal mention of that two... 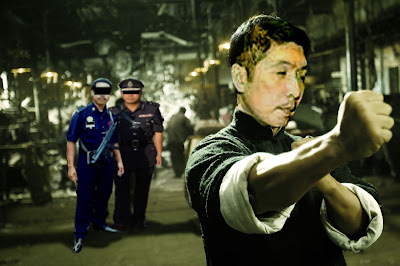 Bugger look too damn sleepy to be Wing Chun Grandmaster. More like drunken fist.
Yes, limpek meant the two fat little dirty piggies in the background. Go read back the article again, and you will see what limpek mean. The only thing mentioned was their names lieutenant corporal Abdul Rahman Mat and lieutenant corporal Mohamad Fitri Junaidi.

And besides, "The kung fu master was accused of intentionally helping..."
Meaning the two fat little dirty piggies were the one who tried to extort from the gold-trader. And sohai Chan was just being the police's barking dog to scare the trader.

But of course, The Star wouldnt wanna focus on anything that might make the Police look bad... They share the same slavemasters anyway. So why not just focus on the Chinese guy with the Chinese Kungfu that the Chinese are so proud of? Being used by dirty piggies just to extort money.

Limpek think this sohai Chan deserve the shame and punishment that he's getting now for being such a doggy dumbfuck, but limpek also think the two fat little dirty piggies deserve just as much coverage. With big pictures splattered on the paper and more details on who they are. What with the selective badguy targetting? Those two are the taikors of the extortion anyway right? The whole article reads as though some kungfu masters involvement with the extortion is much more important than the fact that two POLICE OFFICERS ATTEMPTED TO EXTORT.

Fuck off lah The Star. 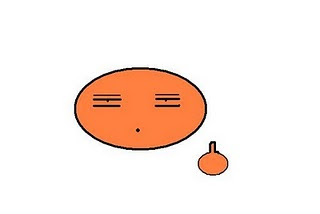 But the problem is, there's no other decent newspaper in good circulation. New Straits Time reports garbage and Utusan Malaysia is just a racist bigot puahbai newspaper more interested in instigating Malay hatred of the Chinese more than anything else.

Besides, they're ALL owned by ruling political party agencies. So, puahbai lor, read what leh?


Thankyoucumagain written by Goldfish Uncle at 1:56 AM