...continue from Kena Raid While Chiko Hot Ger In Zouk

But limpek keep thinking, cannot give up! Rambo also never give up! So limpek decide to forgive her siao char boh-ness and chase after her. But then limpek cannot leave yet. There are still some bottles of whiskey not yet keep! Got many uncles last time told limpek, waste whiskey means will get sent to the 13th level of Hell. Hell King also will personally slap you down.

Limpek ask all other friends to go first and let limpek settle the whiskey. That moment got feel abit like hero from Alien movie like that... "GO! JUST GO! I WILL HOLD THE LINE!", then behind got reluctant teammates and hot ger screaming "NOOOO!!!". Then limpek save the day.

But then real life is always kanasai because they also no fuck limpek and quickly leave without even thinking twice. Hmph! You puahbais all will end up in 13th level of Hell.

After informing the nearby waitress to keep, limpek pull handbrake, swing one U-Turn, avoid bumping into many nehnehs, step accelerator and dashed to follow their trail.

Like Yang Guo chasing after Xiao Long Nu, limpek use all my qing gong (lightness kungfu) to step on air and leap on wind and fly towards the backdoor. Using my nei gong (inner kungfu) limpek trace the scent of Gu Gu (not gugujiao, don’t sampat) and caught a whiff of Pandan smelling perfume… so sweet and tasty it must be hers. Using my qi gong (chi kungfu) limpek yell a “HAAH!!” and the back emergency door burst open. Lastly, using my hiao gong (horny kungfu) limpek emit gps Dickradar detection (reliable up to 2km), and my Magic Stick automatically points to the direction of my target. 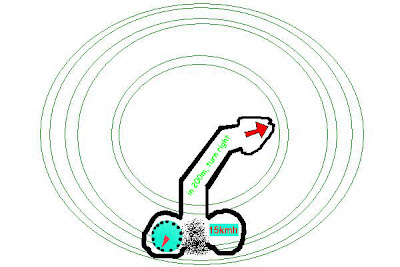 
Found her! But Hot Jane already outside the gate!!! Walaoeh, how can?! Could she have learn ‘Cloud Swift Dance” from the lost Nine Yin True Scripture? How can limpek not catch up? How can? How can the Pandan smell actually come from nearby mamak stall instead? How can?
Life has so many questions.

“NANTI!!” Suddenly, a squeal that sounded suspiciously like a dugong with his balls pulled off stopped limpek in my tracks.

Well, dugong don’t really squeal but limpek imagine that’s how they sound like if they do.

“TAK BOLEH KELUAR SINI!! PERGI DEPAN!!!” The ugliest Malaysian ever appeared from the dark, wearing normal clothes with jacket that look like those mat rempit in Genting Highland. Oh, and quite a fatty too. So automatically limpek know it’s a police in plain clothes. 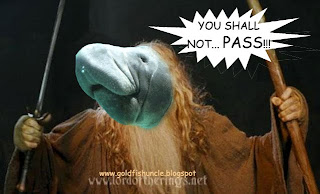 “Semua jalan!” Dugong Police said and turned to the emergency door, must be want to lock it. Then only limpek realize I was not the only one to ‘fly’ out. There was a whole small group of us. Sigh, looks like Condor Hero limpek needs to polish on the qing gong more.

Couple of guys already walking towards the main gate and we all just follow along behind. Dugong Police didn’t bother about us anymore and proceed with his business… Limpek think that ugly bugger thought his Dugong Roar was enough to scare us into submission liao.

Then the strangest thing happen. Walking beside me was this short fat uncle, that look alot like Eric Tsang. 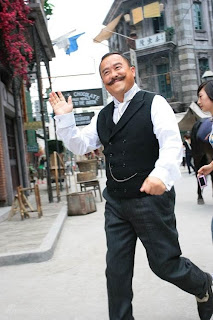 Eric Tsang
One minute he was walking selamba-ly, lighting a cigarette, then next thing you know, BOOM! He was flying in the air sprinting towards the side gate! And limpek not kidding this time when I say flying! He look like he was stepping on air!

“OIII!!!” Dugong Police yelled and ran after him. For a while limpek thought this is some new comedy by Stephen Chow. One ugly round ball running after another flying round ball. But cannot be, never see Yu Fa or Ng Man Tat.

Then, with a single jump... Eric Tsang uncle leap over the side gate! Round body gently gliding in the air with one arm bracing! Like a flying swan across the moon! Autumn sparrow across the sky! Wahh! Sibeh steady!! Sibeh yeng!! Can wet panties kind of yeng!! Sibeh like young Jackie Chan!! 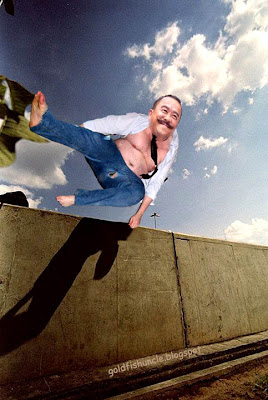 flying swan across the moon
After that he selamba jog and disappear into the night. Dugong Police chase a few step, already panting and choking like Chua Soi Lek trying to have sex. Bravo! Limpek was really sibeh impressed. Eric Tsang uncle is my new hero. Next time if limpek see him in Velvet again will buy him a drink.

At the gate, we cannot go out also. Police lockdown the gate, limpek see so many police truck (those use to sapu horse machine or prostitutes or immigrants wan) limpek think this time hong kan liao. A lot of angmohs were there. A lot of them kaupeh kaubu like little bitches with sand in their panties.

One stupid angmoh guy look like Jason Mraz wan was yelling “Fuck Malaysia, we go Singapore! We go now!”. He looked very drunk and his friend was trying to get him to shut up before the crowd kill him. Limpek think if not got so many police, they really will whack him until pig head cookie liao. Wont be the first time limpek see angmoh kena whack by a mob in clubs. Why is it that whenever stupid angmohs drink abit abit then they start acting sibeh kham lan? As if like they asking to kena whack. Maybe young that time never kena whack much. In fact this stupid angmoh kept shouting the same thing until this big Indian guy went and confront him.

There were some words exchanged. Then shoutings. Then next thing you know, Jason Mraz guy was flying in the air, the big Indian palm stretched out. Walao its like Iron-Palm Indian Shaolin kungfu, angmoh flying backwards. 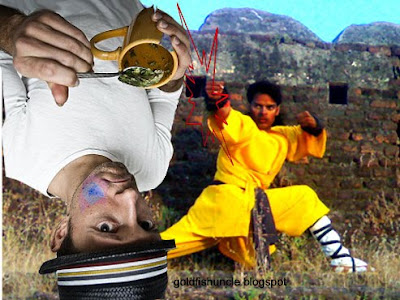 That was a Huo Yan Jia (Fearless) moment there as the Malaysians cheer for the ass-whooping of guai lan angmohs. Then the Indian Shaolin friends quickly go and hold him back before he kill the angmoh and the angmoh friends also quickly pull him away.

That angmoh somemore beh song keep shouting at the police “you stupid police, fuck this place, I bring 10 million in, now I take it to Singapore, fuck you police, you have no right”. Kanineh 10 million? maybe he really Jason Mraz? Cannot be la… look at his cheh-kai face, doesn’t look like he contribute 10 million to Malaysia economy.

Another angmoh, a hot girl that looked like younger Kate Beckinsale was also kaupeh kaubu-ing at the gate. She was screaming and sound almost like wan to cry liao “How the fuck can you do this! This is not right! You cannot make us stay here, I don’t give a fuck I’m leaving now!” Then when the police didn’t respond she went even more sampat “We have our rights! This is basic human rights! I’m reporting this to the United Nations!”

Limpek almost want to roll on the floor laughing. Kanineh human rights somemore what United Nation. Amoi, you dont know in Malaysia only got Manchester United nation and Barisan Nasional rights? Malaysians already completely brainwashed to accept this slavery. Limpek wonder what would have happen if Viet Tony Jaa mention human rights when he kena detain that time.

But the police didn’t even scold the angmohs. They just smiled back and explain patiently to them. Calmly take the abuse like shaolin monks like that. Wahh, you would think that they are saints if you didn’t know that other visitors that are not angmohs will kena whallop and whack until mother cannot recognize. Or make you do naked squats if you’re hot ger from China 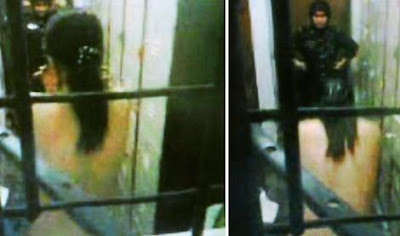 Then, seeing so many commotion, limpek also feel very fhan so decided to walk back to the quiet side area. Limpek got no choice but to squat at one side and smoke like a mat rempit. Nothing much else to do but sit and wait.

Dugong Police is no longer watching there!


Suddenly an enlightening vision blessed by heaven enter limpek's head. Abit blurry at first but soon limpek can make out the shape of a person. No, this time its not a naked Victoria Secret angel with wings. But this time, the vision sent by heaven is a man. And it was Eric Tsang uncle!

Eric Tsang uncle only has one thing to say... 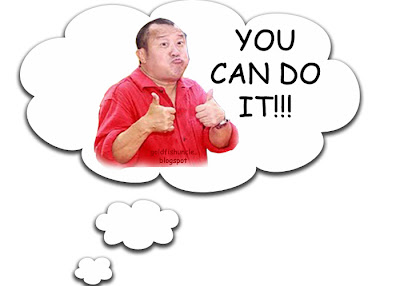 YES!!! Suddenly limpek also feel LIKE CAN DO IT!!!

Limpek start to gather the ‘qi’ 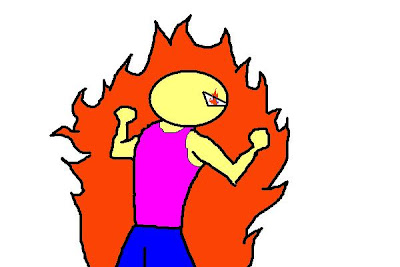 Limpek kick the ground in one mighty leap 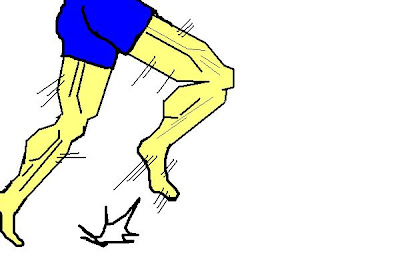 Next thing you know, limpek was flying....

like an eagle cutting the night sky... seeking freedom that was just behind the wall 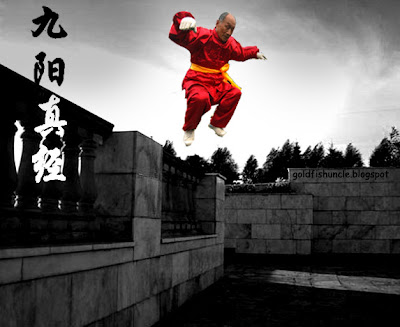 Goldfish Uncle as he was last seen, basked in the bittersweet glory of lonely freedom… flying away among the wind into the darkness of the night.

Nine Yang Holy Scripture no:113 – “Swan Into Jade Maiden Lake at Dusk”
Thankyoucumagain written by Goldfish Uncle at 12:28 AM