There are 62 people in the jail cell.

Limpek ask Jeremy Ang, “how big is the cell?” Who knows right? maybe like lecture hall so big, then 62 inmates not so bad.
“Its very fucking small… I’d say like, around slightly bigger than the size of your room.”
Puahbai you Jeremy. I know limpek’s room very small, you don’t need like that suan siao me.
The size of a typical small Redbox Karaoke room for 4-5 people is 10 m². Limpek do a rough calculation, maybe the size of limpek’s room is about… 400m²?
No lah siao boh… If limpek’s room so big won’t have to kaupeh kaubu everyday liao. Limpek’s room, maybe about 20-30 m² (laugh la laugh la puah bai). A person’s length from shoulder to shoulder is about 0.5m. So a person probably occupy about 0.5m radius circle. So base on Jeremy Ang’s description, this is around how big the jail cell is. 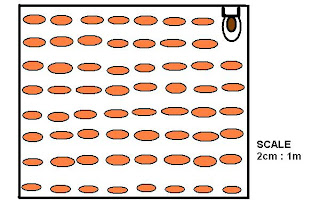 The oval shapes are the 62 prisoners at random standard sizes.

In other words, if the bugger infront of you fart… 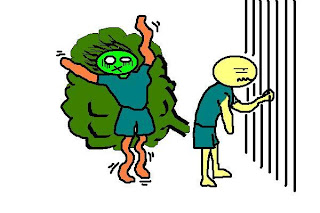 Or if he sneeze… 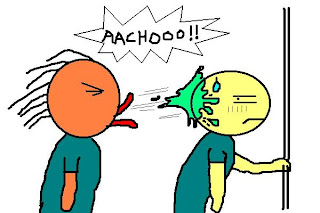 Lack of space can be a very dangerous thing... 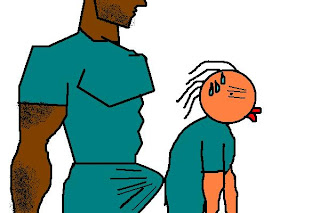 If you refer to the diagram limpek sketch for you, it is obvious there is no room for a person lay down also. So how to sleep? Like that lor… 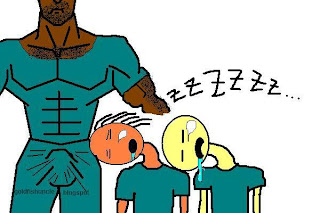 But of course Tony Jaa never slept. There are times when no matter how tired and sleepy you are, your asshole will open up and keep screaming to you “FUCKER WAKE UPPP!!!” because it can sense the sha qi (killing aura) of the big guy behind you. From Saturday early morning when Tony was detained until Monday morning, he never sleep at all. Such is the fear you feel for your kah ch’ng.

The bus which Tony travelled in was stopped in a highway operation. Although limpek don’t think police are allowed to conduct these inspection in the middle of major highway, causing traffic jam. By end of operation, a whole truckload of them (40 immigrants without documents) were sent to balai. The extra 12 inmates were drug addicts / thieves.

Isn’t it awesome that our police are so hardworking, using up a whole team the entire day to grab these immigrants? Limpek guess Malaysia is such a great safe place nowadays with real crimes hardly ever happening so that the police have to occupy all these free time by rounding immigrants. What gangster problems? Snatch thieves? Rempits? Never heard before. Boy kena shot to death? Where got? Oh you mean the robber… Kugan kena whack to death? By whom? Well, maybe if your cat is stuck in the tree they will send an entire team to come help you. Wow Malaysia is really crime-free liao. Police Malaysia, we heart you long time! 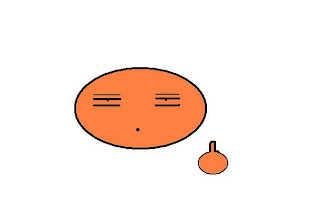 When Jeremy Ang reach there in the morning, he showed them all of Tony’s legal documents to clear him. But the police don’t want to let him go, say have to give compound. Technically there’s no such compound. Jeremy was thinking “knnbccb! Puahbai! fuck ur backside long long time” but his mouth say “Oh sorry tok, please give a chance tok, I travel from KL to get this done tok.” While showing his most geli nahpet smile.
Officer say “Chief wants to see you, but he hasn’t arrive yet. You wait la, he should be here in an hour or so.” The time was already 10:00am. Got people can start work at 11:00am wan? so ‘nais’ (borrow from cheesie).
When Jeremy Ang finally meets the chief, it all came down to demanding kopi money afterall. Chief wanted RM250. Jeremy haggle until finally settle at RM200. Amazing isn’t it? Police saman also you can haggle wan nowadays. Its like pasar buy fish like that, can play walk-away mind game also maybe.
Tony Jaa smelled like he was peed on by the whole neighborhood of cats and then grill with expired petai belacan and then soak in Zouk’s toilet bowl after people puke. Jeremy couldn’t even breathe and drop him off in nearest gas station to shower and change first. A few minutes more and Jeremy would have puke himself also liao.
On the way home, Tony Jaa told him about the jail cell. Some inmates cannot tahan already and only 1 toilet bowl so people were just pissing on their own spot. At the corners even got fresh shit. There’s hardly proper ventilation and no fan, so everybody is like roasted chicken in the afternoon heat. Everyone was coughing on each others faces and spitting everywhere. At nights, the mosquitoes attack like Yakuza and everyone was scratching until bleeding. The itch did not come from just mosquito bites… there were kutus (mites/bugs) everywhere as well and you can even see them jumping/flying around. Tony Jaa had tears streaming down his face while he was recounting his story.
62 inmates. RM200 for each. 200 x 62 = RM12,400. After a single operasi I guess the station can now organize an extra vacation trip to Haatyai this year.
Maybe they got this idea after reading the Star’s report about those subcontractor dog-catchers. Those fellows go around catching stray dogs not giving a shit how they handle the dogs wan. Doesn’t matter if the dogs die also (most of the time the dogs die anyway or get severely wounded), they get paid by the amount of dogs they catch. That’s all that matters.
At least now we know someone in the police force actually got read newspaper wan and very innovative also.

Granted he did not apply MC or get employer's permission. But Tony had only wanted to visit his sick auntie in Perlis.

Tomorrow, limpek post the second important incident. Got nothing to do with this incident actually but in this life, everything is connected.

Again, longer disclosure just for limpek’s own safety: Everything written is fictional and not true at all and meant for blabbering purposes. The author Goldfish Uncle, me, is delusional and semi-retarded and a compulsive liar. The story came in a wet dream induced by overdose of Nescafe kopi plus 5 cans of sugar mix with Colgate. The characters are not real and any resemblance to real person is solely unintended. The Malaysian Police is extremely honest and transparent and great and invincible and intelligent and the greatest gift God has ever given mankind. We love the highly incorruptible Malaysian Police for the peace, justice and efficiency that they stand for.
Limpek already said fiction... if it sounds true, smells true, looks true and seems so obviously true, then you must be delusional and semi-retarded like limpek as well.